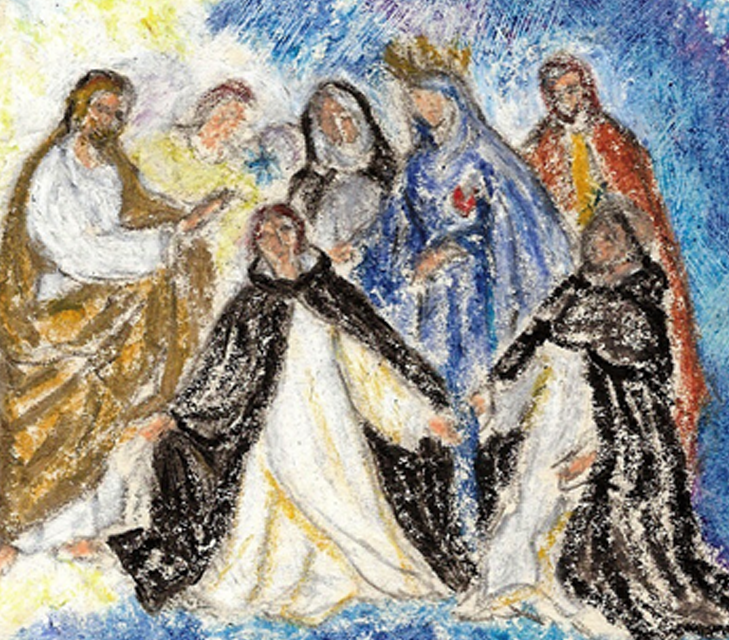 It was very late at night. I was saying my rosary, the sorrowful mysteries. There before me stood Our Blessed Mother, Mary Queen of Sorrows. She seemed tall, regal, in dark blue, gold crown. She showed me Her Sorrowful Heart pierced with seven silver swords. She spoke to me, “You will share my sorrow, you will know the sufferings of the flesh of Jesus. Your sufferings will be much the same as Theresa Neumann. Through your suffering, My Rosary, and the Mass many souls will return to God.” I only remember kneeling very straight listening to the music of her voice. Her words melted into my poor sinful hear. Many times since showing me the sorrow of Her Heart, sometimes tears in Her eyes, She will ask me to pray for Russia – especially France – once Her very own – sins of the flesh have taken many from Her. Pray for us, Mary, pray for us.

This entry marks the first mention of Our Blessed Mother. She appears as Queen of Sorrows, most appropriate with Dorothy’s vocation as a victim soul. It would be logical to assume that this is the reason she entitled the journal of her soul as “Would you let Him suffer alone?” Dorothy would share Mary’s sorrows that are centered upon the Sacrifice of Jesus, Mary’s divine Son. Mary further clarifies Dorothy’s vocation. Dorothy is not only to share in Mary’s sorrows; she is also to “know the sufferings of Jesus’ flesh.” This particular phrase refers to the stigmata that Dorothy would receive. In fact, Our Blessed Mother compared Dorothy’s sufferings from the stigmata to those of Theresa Neumann, who was a well-known stigmatic who lived at that time in Bavaria. There was a further connection with Theresa Neumann in that Dorothy also lived for a certain time without any other nourishment than the Blessed Sacrament. Unlike Theresa Neu-mann’s stigmata, Dorothy’s remained invisible. She was granted this request from Our Lord like her patron and sister in St. Dominic, St. Catherine of Sienna. By Dorothy’s suffering with Mary in union with the Sacrifice of Jesus in the Mass, she was to accomplish her special part for the salvation of her brothers and sisters. This vicarious suffering for others in union with those of Je-sus and Mary are in accordance with the doctrine of the Communion of Saints. In this grace it is especially touching to see the maternal solicitude of Mary for her children, and in an explicit way for Russia and France. At this time, the errors of atheistic communism began to spread over the whole world. And France, which is known as “the eldest daughter of the Church”, whose sym-bol is the fleur-de-lis – the very symbol of Mary’s own purity – was immersed in sins of the flesh.