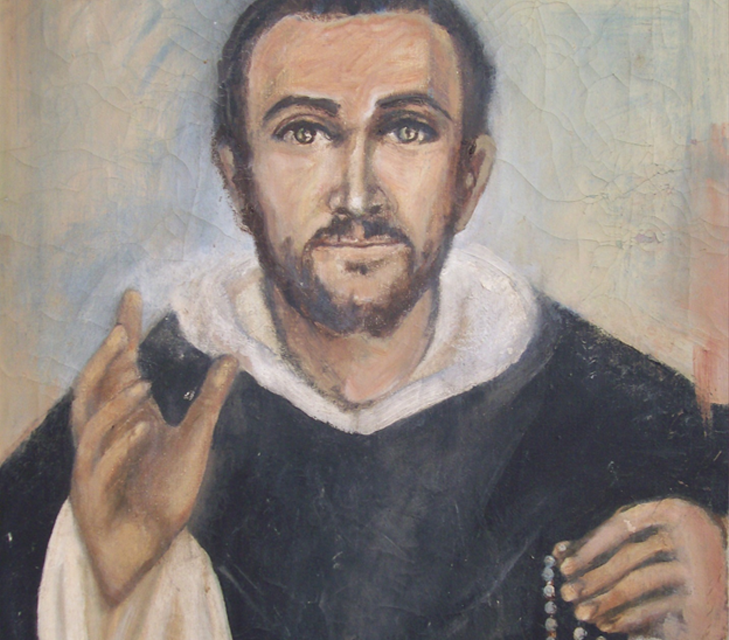 I was standing, facing Saint Dominic (my back to the world) at the Temple Street door of Saint Mary’s Church. We were standing in beautiful clouds slightly above the sidewalk. To the north there was a long road, you could see a great distance even though it seemed dark. Very close to me at my right was a Dominican priest. Saint Dominic took my right hand and placed it in the priest’s and said: “You will go barefooted beggars for souls for me and Our Divine Lord.”

At the same time, Saint Dominic told me that Saint Mary’s would be “a shrine where people will come from afar to honor Our Divine Lord.”

The grace described in this entry concerns the special mission of Dorothy’s life. The presence of St. Dominic and the fact that he tells Dorothy she is to be a barefooted beggar for souls for him-self and Our Lord indicates that Dorothy was to accomplish her mission as his daughter. As a member of the Dominican Third Order, Dorothy took St. Catherine of Sienna for her patron. It should be noted that St. Dominic is the first person in Dorothy’s visions to speak to her, and his words are directed to revealing her special mission.

The reference to St. Mary’s Church indicates the place to which Dorothy’s mission would be linked. The specific mention of the Temple Street door of St. Mary’s is also another prophetic el-ement in this vision for it is through this door that she would pass each day to enter the room where she would work in the basement of the Church. Many of her graces happened in this room. She loved it because there she could remain always close to her Beloved in the Tabernacle above her. More will be mentioned about this in the fourteenth entry. In the present vision Dorothy was also given prophetic knowledge that St. Mary’s would be a place of pilgrimage. In fact, the shrine of the Divine Child of Prague, by which Jesus’ king-ship is honored, became a reality in 1945. St. Mary’s Church has also become the burial place of the Venerable Servant of God, Fr. Michael J. McGivney, founder of the Knights of Columbus.

Dorothy’s life mission has a significant allusion to Jesus’ final discourse in John’s Last Supper account. Upon closer examination, it will become evident how Dorothy’s whole life is particularly connected with this gospel account. The reference to Dorothy’s “back to the world” and her “standing on clouds slightly above the sidewalk” allude to Jesus’ telling His disciples that the world hates them (Jn 15:18) and that they do not belong to the world but that He has chosen them out of the world (Jn 15:17) and that as the Father had sent Him into the world so he sends them. (Jn 17:18). The “dark road” alludes to the remainder of Dorothy’s earthly life during which she would incur the wrath of the world whose ruler is the Devil (Jn 14:30; 16:11). Her life would be replete with suffering and would require heroic virtue. The Dominican priest mentioned is Dorothy’s future confessor and spiritual director whom, however, Dorothy did not yet know. He was transferred to St. Mary’s shortly after the Shrine was inaugurated in l945 by the Pastor and Prior at that time, the Very Rev. Father Burnell, O.P.