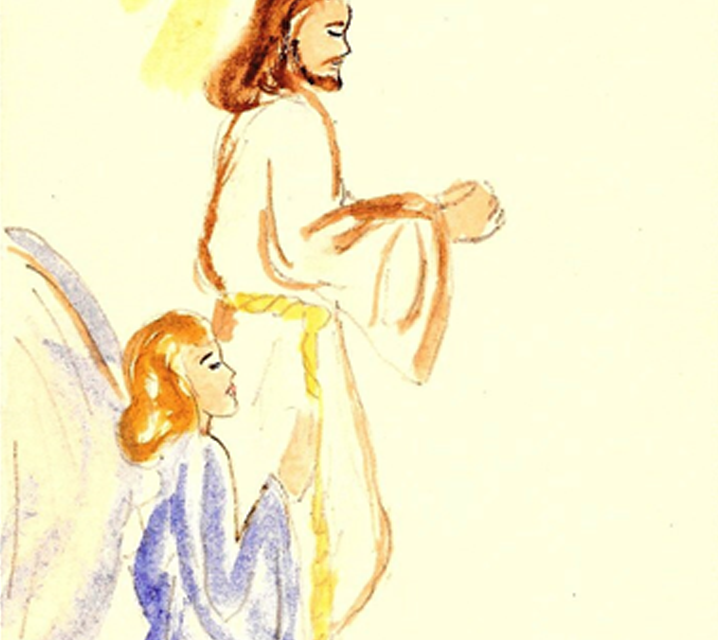 One sultry August morning, having just received Communion, I was adoring and thanking our Lord for coming into my heart. I had no more than the usual feeling of devotion, maybe even less because the intense heat was so distracting. Suddenly there was Jesus standing in front of me. He had on a snow white garment and a deep red cloak. His eyes were deep, soft, and gentile. He bent over and placed a cloak over my shoulder. I wasn’t surprised, only at the color. As he fas-tened it, I looked up and said, “My Jesus, it’s red!”

Then for the first time, I heard His voice. He said, “ because you will be a victim of My love.”

All day while I was working I felt a beautiful peace, but then, because I feared my own mind, I decided to forget. I was sure that would be best. I had no knowledge of such things.

Again, Dorothy receives her grace together with Holy Communion. The fact that this grace came when Dorothy was distracted is indicative that it did not come from herself but from the divine action. Here Our Lord finally and explicitly reveals His will regarding Dorothy’s special voca-tion, and she remarks that this is the first time she hears his voice. She is to share in His victim-hood, she is to be a victim of His love. St. Paul says in Heb 9:22: “. . . without the shedding of blood there is no forgiveness.” As a victim for the forgiveness of the world’s sins, Jesus is clothed in a red cloak, and as a sign of her vocation He gave Dorothy a cloak like His very own. The peace Dorothy felt is the special gift of Jesus of which he speaks in John’s Last Supper Dis-course (15:27). It is the peace which only He can give. Dorothy’s comment about her “fearing her own mind” and her saying that she “had no knowledge of such things” indicate that she could hardly have made the vision up since she did not even understand it.